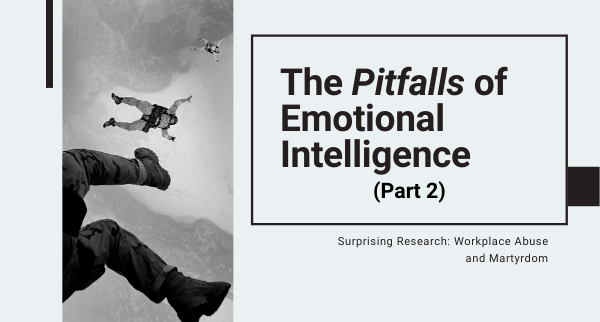 For Part 2 of my series of articles on EQ pitfalls, I thought I’d share the story of how I got started down this road – the shocking piece of research I stumbled over.

When emotional intelligence began becoming popular, I only paid so much attention. I read the book and realized that it was something I’d already been doing. I didn’t think that much more about it.

That was before I understood the pitfalls.

Several years ago, I ran across the first information that stopped me in my tracks.

It was research that found victims of workplace bullying have high emotional intelligence.

The research stunned me. I just sat there for a few moments as the information – and its implications – sank in.

One reason it hit me so hard was because I’ve experienced a lot of abuse in my life. A lot of dysfunctional relationships.

So much so that some years back I did a deep dive into the research on abuse in the workplace, home and schools. I learned a lot. I developed some very different perspectives on it. There’s much more to it than the capital ‘B’ bullying behavior we think of when we hear the word bullying. Whether you call it workplace politics, toxic relationship or one of the many other names for it, we all experience it. A lot of it can be quite subtle.

So, it was a shock to read that victims of emotional abuse tend to have high emotional intelligence.

After all, emotional intelligence has been held up as the gold standard, especially in the corporate realm. It was the beginning of several bigger puzzle pieces falling into place. I didn’t know it at the time, but it was an essential bit to questions I’d been asking about. And it was to take my life in new directions.

Too often, we hear the benefits of models like EQ or practices like meditation and we take them up without questioning them.

We need to question them. We need to explore the assumptions behind them, so that we develop models and practices that work for people in real-life situations. So, we can get unstuck from the places we’re caught. Live with less struggle. And have the capacity to solve bigger problems.

Research findings suggesting people with high EQ are often victims of workplace bullying is a red flag. It says we need to dig deeper and question whether EQ is the model of emotional health we’ve been told it is.

EQ gets confused with being pleasant to everyone and having harmony all the time. Interactions become superficial as people avoid conflict to keep the peace. It becomes phoniness.

There’s also a reputation issue. People are hesitant to bring up anything with emotional punch behind it because they don’t want to be judged as lacking in emotional intelligence.

The problem, of course, is that you’re not talking about the hard stuff You’re not addressing the underlying issues. Those eventually come back to bite you.

It’s also easy to lose yourself in the barrage of emotions. People already struggle to separate which emotions are theirs and which belong to others. In EQ, you learn self-awareness, to be aware and assess your emotions, and you learn social awareness, in which you’re aware and have empathy for other’s emotions.

Learning to have empathy for others, but not the self is a recipe for unhealthy emotional living. You put others and their emotions before yourself. You create poor boundaries. You become a martyr, sacrificing yourself for others. You repress anger. You get depleted and burnout.

I’ll explore more of these elements in upcoming articles. In Part 3, I’ll be diving into how EQ as a mental model is limited in its ability to resolve and integrate emotions.