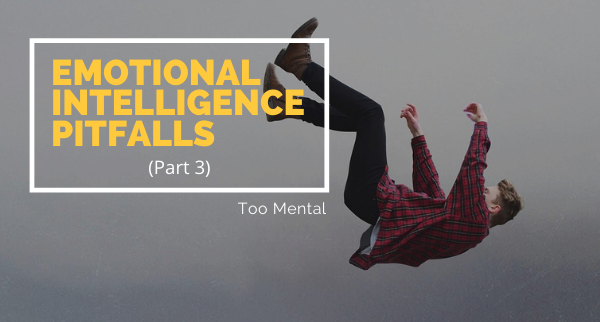 In this 3rd article in the series of EQ pitfalls, I explore why emotional intelligence is a limited model for emotional and mental health.

In the 1st article, I examined the liabilities of EI for leaders. The 2nd article delved into research showing high levels of EQ in victims of workplace bullying.

The issue I’m examining in this 3rd article is a core issue with emotional intelligence. In short, EI is a mental model. It’s intellectual and so limited in its ability to resolve and integrate emotions.

There are numerous emotional intelligence models out there, with varying numbers of parts. Here’s an example of a pretty common one with 5 parts:

Self-awareness is the ability to monitor your feelings and be able to identify and name the emotions and understand their effect on others.

Self-regulation is the ability to control or re- direct disruptive emotional impulses and moods and manage feelings so they do not disrupt life.

Motivation is about maintaining a positive, productive state.

Empathy is the ability to detect emotions and the emotional makeup of others and treat people accordingly.

Social Skills involves interacting well with others including being able to find common ground and build rapport.

Overall, emotional intelligence is described as the ability to perceive, identify, and manage emotions.

Except for empathy, those are all mental and intellectual functions.

You do everything with your emotions but feel them.

EQ is an intellectual response to something that isn’t mental. The result is that it often becomes about controlling our feelings, frequently blunting them in the process.

When approaching your emotions from the intellect, it’s easy to think you know them while actually being disconnected from them.

That leaves us struggling with difficult emotions and moods. We try to eliminate or escape them. We attempt to reason with them. We endeavour to watch them objectively without becoming entangled in them. We rationalize them. We label them. We dismiss them.

Essentially, we’re just managing them. I liken it to continually moving chess pieces around a board – with no end game.

Where did we get that idea? It’s a complex history. But there have been lots of faulty notions that supported it. One was the Triune brain model introduced in the 1950’s. You’ve likely heard people talk about the reptilian brain.

Paul MacLean proposed the 3-layer model in which the first layer to develop was the reptilian brain, harboring various lower appetites. The emotional mammalian brain evolved next. Finally, the human rational brain grew, surrounding – and controlling – both those lower layers.

This model has no basis in reality. Our brains share similar components to other species. Brains didn’t evolve in layers. You don’t have a reptilian brain. Instead, brains grow by reorganizing.

But these ideas have had sticking power. The notion that emotions are inner beasts that need to be controlled is still very much with us.

When we pit left brain against right, we create a battleground of our inner space, essentially fighting ourselves.

It’s time to throw out the brain as battlefield view.

What emotional intelligence has given us is awareness of our emotions. And the understanding that they deserve a place at the table. That’s an important first step.

For deeper emotional health, we need approaches that challenge our fear of negative emotions. The idea of left brain over right, of reason over emotions is deeply embedded in our collective psyche. A good emotional model must confront and overturn it. Or we risk keeping our brains as battlefields, unable to reach inner peace and limited in our ability to develop a new relationship with ourselves and our emotions. We risk limiting our potential.